Languages
Home » Election 2020 » I am not throwing away my shot! Do third-party presidential candidates stand a chance?
Election 2020

I am not throwing away my shot! Do third-party presidential candidates stand a chance?

Third-party presidential candidates have been around since the 1800s, and  although they normally get few votes and scant media coverage, they have been known to focus attention on important issues that the major party candidates neglect and sometimes to even change the outcome of a race. But can someone who isn’t a Democrat or Republican ever win the U.S. presidency?

Theodore Roosevelt in 1912 and Ross Perot in 1992 had the biggest impact  as third-party presidential candidates. Roosevelt, the former president, won 27 percent of the vote in the election of 1912, when he challenged his Republican successor Howard Taft and ran as a candidate of the Progressive Party. Both men lost to Calvin Coolidge.  Perot, running as a Reform Party candidate against Bill Clinton (D) and George Bush (R ), secured almost 19 percent of the vote in 1992, which was the highest percentage a third-party candidate got since Roosevelt in 1912. Clinton won.

“Third party candidates are at tremendous disadvantages because the major parties write laws and rules making it difficult for them. They have trouble raising money and so cannot get their ideas before the public and rarely are they allowed in debates that might get their ideas out there,” Cal Jillson, political science professor at Southern Methodist University’s Dedman College of Humanities and Sciences in University Park, Texas, said in an interview.

In 2016, Jill Stein of the Green Party and Gary Johnson of the Libertarian Party collectively took enough of the vote in several  states to deny either major-party presidential candidate a majority. Two factors in the increase of third-party voting in 2016 was the number of voters who disliked both Hillary Clinton and Donald Trump, and those Democrats who believed there was little chance Trump could win, according to AP News.

Jillson said, “Third party candidates are unlikely to impact the 2020 presidential election because the electorate is highly polarized and intent on reelecting Trump or sending him back to Mira Lago.”

Cavani Diggs, senior political science major at Howard University, said, “American is centered on belief in a two-party system. That focus doesn’t allow them to look at or take into account any other party’s beliefs because they automatically assume it won’t appeal to them in any way.”

In addition to Republican incumbent Trump and Democrat Joe Biden, the 2020 presidential candidates include Jo Jorgensen of the Liberation Party, Howie Hawkins of the Green Party and  rapper Kanye West, who is asking supporters to write him in on their ballots. Hawkins is proposing an eco-socialist Green New Deal, while Jorgensen is proposing a much smaller government to solve the nation’s problems. Kanye West’s attempt  to get on the ballot has been characterized by some as essentially  a vote for Donald Trump.

“The hip-hop star and fashion mogul has launched a scattershot campaign that many of Trump’s allies believe could siphon votes away from Biden. With a number of Trump supporters working on the ground to advance West’s campaign, many Democrats view his candidacy as a dirty trick by Republicans,” AP News said.

While such long-shot candidates can sometimes change the outcome, truth be told, it is highly unlikely that a third party would ever win a presidential election.

The road to restoration: reclaiming your rights as a once-convicted felon
Black Women Voters Wield Power During Elections. But After the Voting, Not So Much 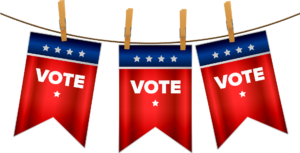