Love Story for the History Books 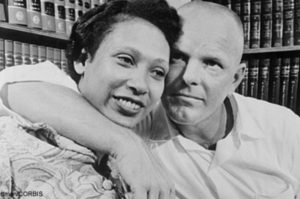 Mildred Loving, born in 1939, was a civil rights activist who successfully defeated Virginia’s ban on interracial marriage on June 12, 1967.

Mildred Jeter was born and raised in Central Point, Virginia, about 90 miles south of Washington, D.C. She attended an all-black high school, and met her future husband, Richard Loving, in Central Point. He attended an all-white school. They saw each other in secret, and at the age of 18, Mildred became pregnant and the couple decided to get married.

At the time, Virginia’s Racial Integrity Act of 1924 did not allow the couple to be married in their home state so they traveled to Washington, where it was legal for a black woman to marry a white man. They were married in June 1958. After returning to the state, Virginia would not legally accept the marriage and both of them were arrested and later convicted of violating the state’s anti-miscegenation law. A judge sentenced them to one year in jail.

The couple had to relocate to Washington to avoid imprisonment and raise their family in peace.

After years of frustration, the Lovings tried to get the conviction overturned in the midst of the civil rights movement sweeping the country in the 1960s. After being denied by the Virginia Supreme Court, the Lovings took their case to the U.S. Supreme Court. On June 12, 1967, the court ruled unanimously in favor of the Lovings, calling the anti-miscegenation law unconstitutional. This ruling also ended the ban on interracial marriages in more than a dozen other states.

The case has been the focus of books and movies, including an HBO documentary, and most recently, a film titled “Loving” released last year. The film, written and directed by Jeff Nichols, was nominated for many awards, and actress Ruth Negga, who plays Mildred Loving, is up for an Oscar for best actress in a leading role.

The Lovings and their three children returned to Caroline County, Virginia, after the court victory. Richard Loving was killed in a car accident in 1975. Mildred continued to reside in Central Point after his death. She died from pneumonia in 2008.

Flo-Jo … Faster Than A Speeding Bullet….
Edwin B. Henderson: Grandfather of Black Basketball