In the midst of increased racial tensions in the U.S., a new kind of cultural appropriation has emerged, which some have dubbed “Blackfishing.”

Cultural appropriation, the idea of members of one culture adopting elements of another culture, is a hot topic on social media. The term Blackfishing is used to describe an extreme case. It refers to someone altering their face and body to appear as Black or racially ambiguous when in fact they are of Caucasian or non-African descent.

Blackfishing got its name from catfishing, slang for someone seducing a person by using a false identity. It has become popular with celebrities and social media influencers, who bronze or tan their skin to appear darker, wear traditionally Black hairstyles and fashion and even go so far as to get butt and lip injections, all to appear Black or racially ambiguous.

One of the biggest examples of Blackfishing today is Kim Kardashian. BBC News, in a 2018 article, reported that Kardashian has been accused on multiple accounts of appropriating Black culture with her hair, body, clothes and family, all for profit gain.

More recently, a professor at George Washington University was accused of Blackfishing during her entire professional career. Jessica A. Krug was an African and Latin American studies teacher at GWU who claimed to have a Black and Latin heritage. But in an article on Medium.com in September, she revealed that she is white. According to CNN, “Krug acknowledged in her post that she had no right to claim these identities, saying that ‘doing so is the very epitome of violence, of thievery and appropriation, of the myriad ways in which non-Black people continue to use and abuse Black identities and cultures.’”

However, this concept goes deeper than just putting on bronzer and tanning. According to Nicholas Sammond, a cinema studies teacher at the University of Toronto, the concept of Blackfishing “reveals [that] the white identity desires a fantasy for temporary benefits of Blackness.” In an interview on NPR’s Code Switch, Sammond said there is a “deep, deep fetish for temporary Blackness and the benefits of Blackness” while not having to experience Black trauma.

For some, Blackfishing brings to mind blackface, a term first coined in the 1830s in New York. Blackface was originally known as blackface minstrelsy or minstrel shows and is defined as the comic enactment of racial stereotypes, according to Britannica.

Minstrel shows were performed by white actors with faces blackened with burnt cork or shoe polish who would wear worn-out clothing and imitate enslaved Africans on Southern plantations. Performers would often portray Black people as lazy, conniving, ignorant, uneducated and hypersexual beings. Blackface became one of the most popular forms of entertainment during the mid-1800s, after the character “Jim Crow” gained fame. The Jim Crow name and purpose grew into the narrative of a whole era and portrayal of Black people and Black stereotypes, according to the National Museum of African American History and Culture.

In an interview with Truth Be Told, Sammond said Blackface and Blackfishing are “two sides of the same coin…Both trade on fantasies/fears of whiteness as inauthentic or inadequate, and of Blackness as more embodied, natural and authentic.”

The purpose of Blackface was to entertain, to mock African slaves and to systematize the idea that Blacks are less than whites. Over the centuries, Black culture has been ridiculed and disparaged by others, but some have now turned to appropriating it–and abusing it.

Black culture is at the forefront of 21st century American media, entertainment and music. Hip-hop and rap have become mainstream music and as their popularity rises, so does the influence of Black people and their culture. It has become the new “trend” that people want to follow.

Lauren Michele Jackson, author and doctoral candidate at the University of Chicago, speaks of this in her book, “The White Negroes: When Cornrows Were in Vogue…and Other Thoughts on Cultural Appropriation,” which “exposes the new generation of whiteness thriving at the expense and borrowed ingenuity of black people—and explores how this intensifies racial inequality.”

She describes in her book and on NPR’s Code Switch how Black culture is now being stripped from Black people the same way blackface stripped Blacks of their culture in the 1800s. It is dehumanizing and degrades the very being of Black identity, she said, leaving Black people with no form or way of expressing their individuality and collective force.

So it seems the racism of blackface has morphed into Blackfishing.

Sammond, reciting a 1968 quote by James Baldwin, said: “What it means to be a Negro in this country is that you represent, you are the receptacle of and the vehicle of, all the pain, disaster, sorrow which white Americans think they can escape.”

Would increased police training save black lives?
Is 15 Percent Too Much to Ask? 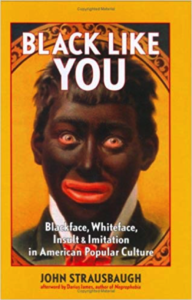