Students and administrators at Prairie View A&M University and their supporters headed toward Tuesday’s election still waiting for resolution of a voting rights lawsuit from two years ago, and mindful that whatever the outcome, more similar battles lie ahead.

The NAACP Legal Defense and Educational Fund and others are part of a federal court suit claiming that Waller County officials violated the voting rights of the students and residents of the city of Prairie View during the 2018 elections when they closed a campus polling place during the first week of a two-week early voting period.

The lawsuit seeks assurances from the county that students and residents of the predominantly Black city will have the same amount of time and places to cast their ballots as in other cities in the county, which is about 50 miles outside Houston.

Both sides in the lawsuit were reported negotiating terms of a possible settlement, but an agreement appeared unlikely before Tuesday, the final day of balloting this year.

“I wish I could say that 2018 was sort of an anomaly, but 2018 is sort of par for the course in that county of not wanting those students to have an impact on politics,” Melanye Price, a political science professor at the university, said in an interview.

“Sadly, because of the loss of the Voting Rights Act and the way in which it was undermined, until we have national voting rights law that protects vulnerable groups, including Black people,  from voter suppression, then we are going to end up in the courts like this over, and over, and over again.”

A federal judge heard testimony in the case in mid-October. Early voting in Texas began around the same time, and on its first day, about 100 A&M students, led by the head of student government and joined by the university president, marched from the campus to the only open polling place in town to draw attention to the case and to their cause.

“I would say that things are progressing and moving,” Alanna Gaskin, the student government president, told Texas Public Radio. “I know that our city council has been working hard to ensure that we still have the right to vote. I feel very optimistic about it, I feel like there is going to bring a change from this case.”

In the lawsuit, the students and their supporters are seeking not only assurances for equal opportunities and locations to cast their ballots. They also are asking that any rule changes the county wants to make that would impact voting rights be cleared by the courts or the U.S. Justice Department before they go into effect.

Such so-called “preclearance” was a requirement for certain states, including Texas, under the Voting Rights Act of 1965. But a 5-4 U.S. Supreme Court decision in 2013 weakened that part of the law, voting rights advocates say, effectively requiring plaintiffs to prove discrimination after the actions have been implemented, rather than before.

Like many public HBCUs, most of A&M’s nearly 9,000 students are state residents, and their votes can make a difference in local as well as state contests. Their number is almost half again the number of city residents, who in turn make up more than 10 percent of Waller County’s population of 53,000.

For decades, the town and the college have battled the county and its officials in what Leah C. Aden, deputy director of litigation for the NAACP fund,  described as the county’s long and “persistent” record “of suppressing the political power of Black voters.”

“College students across the country have the right to vote where they go to school, yet Waller County continues to be nationally known, stratagem and stratagem, to limit Black students’ voting rights, “ Aden told The Houston Chronicle.

NORTH CAROLINA, like Texas, has a sizeable network of public HBCUs, and also has been accused in court of suppressing Black votes before and after the 2013 Supreme Court decision.

There are five public HBCUs in the state with a combined enrollment of 33,000. One third of those students attend North Carolina A&T State University in Greensboro, the largest historically Black college in the nation. Seven of every 10 A&T Aggies is a legal resident of the state, and thus a potential voter in local and state elections, whether they vote on or off the campus.

Many such students are encouraged to use their campus addresses when they register to vote so campus power can better affect events in the surrounding communities—their homes during their college years, said Irving Joyner, a law school professor at North Carolina Central University, a public HBCU in Durham.

“It goes back to this notion of the political muscle that they are able to demonstrate in thecommunity,” Joyner said in an interview.

A study of early voting in North Carolina’s late February election this year found that students at seven of 10 selected colleges, including three HBCUs, cast ballots at a higher rate than the state average of about 11 percent voter turnout, or one of every nine registered voters.

A&T was above that average at close to two of every nine, Winston-Salem State University, also an HBCU, was about average in turnout, and North Carolina Central was below average. Predominantly white Duke University, a private college in Durham, was among the highest, with a 34 percent rate, three of every nine.

The founder of EQV Analytics, the firm that conducted the study, concluded that college students who vote overwhelmingly vote early and on campus if they vote at all, and that the absence of polling places on or near college campuses could discourage students from voting.

The new map places all of Greensboro, the city where the school is located, and surrounding Guilford County and the entire population of Winston-Salem—a 30-minute drive from A&T—into a single district. The result is projected to flip a currently Republican seat to a Democratic one and possibly give the state a third Black member of the House after Tuesday’s elections.

The U.S. Supreme Court had declined to rule on the merits of a challenge to the fairness of the old map, with Chief Justice John G. Roberts Jr. writing that “partisan gerrymandering claims” were matters for states to decide, not the federal government.

WITH LESS THAN a week remaining before Election Day, twice as many young voters nationwide had cast early ballots this year than at a similar point in 2016, according to data compiled by Tufts University.

In Texas, more ballots had been cast before Election Day than had been cast through the entire voting period four years ago, and North Carolina early voters were on track to do the same.

Polls continued to forecast a close contest for North Carolina’s 15 electoral votes, which President Trump won in 2016. Democrat Jimmy Carter carried the state in 1976, and Democrat Barack Obama won it in 2008. Republicans came out on top in North Carolina in every presidential election in between.

Texas has 38 electoral votes, second only to California’s 55. Trump won the state four years ago, finishing 9 points ahead of Democrat Hillary Clinton. Carter’s 1976 victory over Gerald Ford was the last time a Democrat won Texas. Recent polls indicated that Tuesday’s contest is a statistical dead heat.

Correction: An earlier version of this article misstated the name of the organization that is a part of the lawsuit against Waller County. The organization is the NAACP Legal Defense and Educational Fund.

MORE BLUE SKIES FOR BLACK DEMOCRATS IN VIRGINIA?
The road to restoration: reclaiming your rights as a once-convicted felon 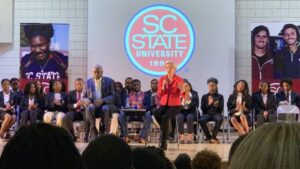 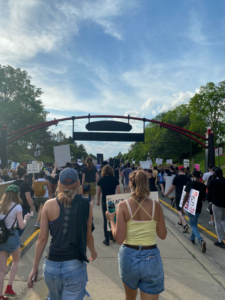