Essayist and journalist David Samuels called Kanye West “the Mozart of American music” In a 2012 article in The Atlantic. Barring a cello version of, say, “All of the Lights” on YouTube, that’s probably as close as this generation has come to having hip-hop and classical music rub shoulders.

Enter Black Violin, comprised of violist Wil Baptiste and violinist Kev Marcus, who not only make hip-hop and classical touch, but have a full on love affair. The sparks are flying in their major-label album debut, “Stereotypes.”

The title is an unsubtle hint that the duo are tackling the sort of presumptions the average person no doubt makes when they picture two 6-foot-tall black men with string instruments — the sort of look that sizes them up and says, “That’s interesting.” It’s the look that has likely followed them around in the decade that they’ve worked together, even while on stage performing for President Obama at his 2013 inaugural ball.

Their timing couldn’t be more apt. WXQR.org reports that fewer than three orchestral musicians in the United States are black.

“A combination of discrimination and lack of exposure to classical at an early age meant that black people were unlikely to make it to the concert hall (be that in the audience or in the pit),” Hollywood screenwriter Candice Allen said in a 2013 article from independent.co.uk. “So when they did, their sense of alienation made the experience not one to be repeated.”

Marcus, whose real last name is Sylvester, says in an interview with NPR that he initially dismissed the violin as uncool, and Baptiste originally wanted to play the saxophone. But soon both began to love orchestral music, and Baptiste even began to see parallels in hip-hop.

“They had little shindigs going on back in the days, right?” Baptiste said. “Like, I’m this guy, I own this palace — Mozart, listen, what can you whip up, man? I need some tunes.”

Marcus then added: “It’s just like, I need Grandmaster Flash to DJ my party.” 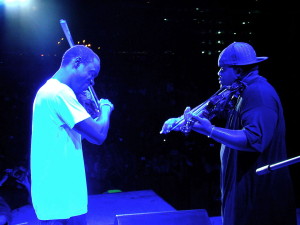 In Black Violin’s merging of the genres, this is precisely the point of course. Baptiste and Marcus see no reason that a viola or violin can’t get the party going. They also don’t want elitist thinking looking down on hip-hop. On the title track and throughout, Baptiste and Marcus work their bows furiously, as if each note is swatting away the sort of stereotypes that regular people (including Marcus) discuss on the song.

Singers Melanie Fiona and Kandace Springs and The Roots’s Black Thought also pop up to spout the album’s inspirational themes, and the string duo gets added musical heft thanks to the pianist Robert Gasper, Soulie’s guitarist Eric Krasno and Bon Iver’s Rob Moose. Those names give you a sense of the various genres being stirred around. The fumes from this potent potion give off not only hip-hop and Classical, but also R&B, jazz and funk. (A stripped-down rendition of “Walk on By” would make Isaac Hayes smile.)

This very rich blend of genres is the duo’s most persuasive sermon on stereotypes, and the best moments on “Stereotypes” simply put on display their swift virtuosity.

Listening to their work, one sees no reason why classical music remains less racially integrated than other forms of music. If young black musicians can go by Black Violin’s example, orchestral music need not be “still dominated by dead white men’s music performed by living white men,” as a Guardian article from January so eloquently put it.

Either way, “Stereotypes” works whether you listen to Mozart or not. And it will work if Mozart is the only type of musician you do listen to. Black Violin made “Stereotypes” for both listeners. Their one hope is that those listeners can become friends. This album will make for a good ice breaker.

Marc Rivers, a film major at Howard University, is a cultural critic and writer for TruthBeTold.news. He is also co-founder of ATribeCalledNews.com. 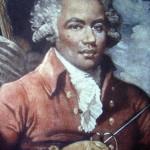 Here are timelines of “28 Classical Music Moments in Black History” from Houston Public Media and “A History of Black Classical Musicians” from WQXR in New York. A modern etching of a 1787 etching depicts Chevalier de Saint-Georges, left, a composer and fencer in France.

Can You Spell That for Me Again?
Does Planned Parenthood Have a Strategic Plan for Black Genocide?