#nomakeup with a little help? 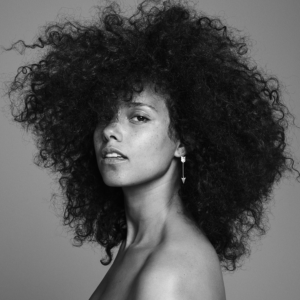 The cover of Alycia Keys’ new album, “Here,” which depicts her #nomakeup look and reveals her freckles. (Photo: Paola)

Alicia Keys launched a movement after she published a letter on Lena Dunham’s blog, Lenny, in May, stating that she has had enough of wearing makeup everyday. Her reason is simple: “I don’t want to cover up anymore. Not my face, not my mind, not my soul, not my thoughts, not my dreams, not my struggles, not my emotional growth. Nothing.“

The singer developed the idea during a photo shoot for her new album “Here.” She came to the location without makeup, because she had been at the gym. The photographer Paola then wanted to shoot her just the way she was — “raw and real.” The photo became the cover of Keys’ album. No colorful lipstick or dark eye shadow. Just Alicia Keys showing her freckles for the first time. It was the beginning of the movement.

Many women all over the world understand Keys’ struggle. They’re feeling the need to cover up and look beautiful for others. Girls and celebrities have been following Keys’ trend, using the hashtag #nomakeup to describe their pictures on social media.

But why does Keys still need a makeup artist for her #nomakeup-look?

In an interview with the online beauty magazine intothegloss.com, her make-up artist, Dotti, revealed what products are needed to get Keys’ look. She uses skin tint, lip balm with tint, blush and fake eyelashes to fill in the brows.

“If I bring any color to the cheeks, it’s just to highlight that youthfulness,” Dotti explained. “Blush really helps bring a glow that people don’t realize is a little bit of makeup.”

“Instead of foundation, we do a skin tint.”

“I’ll cut individual false eyelashes and use them on the eyebrow to have that realness.”

TruthBeTold.news asked Dotti why she and Keys call it #nomakeup, if the look still contains a lot of beauty products.

“I’m interested in enhancing someone’s natural beauty — an aesthetic sensibility that is in harmony with one’s features,” Dotti responded.

“Fake lashes in the brow is just a few hairs to fill in a hole,” she said. “Lip balm is an organic lip treatment with a tint. “

“I strongly believe in a healthy lifestyle; it is essential to this look. Stress, bad diet, air pollution are factors in how our skin reacts.”

Sure, those are just a few hairs or organic treatments, but those products are still cosmetic products. And they help to cover up flaws and make people appear more beautiful. So Keys is still covering up somehow, even though she said that she wanted to free herself from the need to wear makeup and beauty products.

Y’all, me choosing to be makeup free doesn’t mean I’m anti-makeup. Do you! ?? pic.twitter.com/Mg0Ug9YA9q

George Clinton on the Mothership, the Smithsonian — and Funk
Was the Black Cook From the Movie “Pearl Harbor” Real?