Languages
Home » News » Immigration » The Africans Among Them
Immigration

The Africans Among Them

The woman who said a doctor at an immigrant detention center removed one of her fallopian tubes without her consent doesn’t quite fit the Trump administration’s suggested image of a desperate illegal alien sneaking across the border from Mexico.

She is 30 years old, has a 12-year-old American-born daughter, and has lived in the United States for more than two decades.

She has been in the country without legal permission. She was brought here 27 years ago on a visa that since has expired. And, most recently, she could have been spared deportation were it not for admitting her guilt in one case of shoplifting when she was 17, and another on a larceny charge in 2013.

That record disqualified her for protection under DACA, the special program that grants temporary residence to some who came to the United States as children. So in October 2017, she was placed in detention to await her fate.

For some time, she had complained about the surgery performed on her and others, and her accusation became news when echoed in a whistleblower complaint by a nurse at one of the facilities. Had it not been for last-minute interventions by a pair of congresswomen, she would have been whisked off to a homeland she’s hardly known.

Yet, perhaps the most striking thing about the woman, initially identified only by her first name, is that she is neither Guatemalan, Honduran, Salvadoran nor Mexican.

Pauline Binam is from Cameroon in Central Africa, and she has many native sisters in similar circumstances here, encountering similar travails under the administration’s hardline immigration policies.

Earlier this year, a group of about 40 Cameroonian women staged a sit-in and released an open letter outlining complaints of  inadequate medical care at a refugee facility near Austin, Texas.

A month after the demonstration, Immigration and Customs Enforcement (ICE) officials transferred 160 Cameroonian women to other facilities, and a second group of about 120 women also was dispersed.

An estimated 10,000 Cameroonians have sought asylum or humanitarian refuge in the United States since 2016 because of ongoing violence between separatists in English-speaking parts of that nation and its government, which is dominated by French speakers.

Some 670,000 people from Cameroon, which has a population nearly as large as Texas, have been displaced by the atrocities, and an estimated 60,000 have sought refuge next door in Nigeria.

The sit-in protestors said that about 300 of the 500 women at the facility, the T. Don Hutto Residential Center in Taylor, were Africans, and about 200 of them were from Cameroon. Many were being forced against their will, they said, to sign letters agreeing to be sent back to Cameroon.

“We are being treated unfairly and there is a lot of [discrimination] between the African women and the white,” they said in a handwritten letter. “Almost all the white women we came in with and even others who came after us have been released on parole and bond but we’ve been denied both parole and bond.”

Immigrant rights advocates said those who complained of conditions were being punished.

“These guards are intentionally refusing to attend to the medical needs of these women as a form of further torture and retaliation for standing up for their human rights and dignity,” Nana Gyamfi, executive director of Black Alliance for Just Immigration (BAJI), told Prism. “My concern is that the retaliation will increase and women will die.”

In early October, dozens of Cameroon-born immigrants were transferred to a detention center in Alvarado, Texas, an hour from Dallas, and scheduled for deportation. The Southern Poverty Law Center said some of them had been abused, beaten and forced to sign deportation papers.

Josephine Kinaka, who had crossed the border at Laredo, Texas, a year ago, was among the immigrants. “It is so scary to think what is waiting for me back in Cameroon,” she told the Dallas Morning News in a telephone interview.

Many if not most of the Cameroonians, unlike Binam, are recent border crossers. Like the thousands of individuals and families fleeing conditions in Central America, they enter the United States from Mexico.

The Africans come from various countries on the continent, and many go first to Ecuador in South America, which for many years has accepted visitors from all over without requiring a visa. From there, the Africans would make their way north.

They then would cross the border to apply for asylum, which under accepted U.S. and international law should be requested from inside the country in which the person wants to live.

Many enter the United States at authorized border crossings. For decades, others have crossed at unauthorized points, gone directly to U.S. authorities, and surrendered for processing.

The Trump administration has changed those standing policies, however. It has brought charges against those who cross at unauthorized entry points and used such violations as grounds to deport them before any processing can begin or be completed.

Last July, it went a step further and stipulated that those requesting U.S. asylum must first prove that they had applied for and been denied asylum in any country they may have been in on their way here. The provision was specifically aimed at the southern border and those coming through Mexico.

“Ultimately,” the Department of Homeland Security declared, “today’s action will reduce the overwhelming burdens on our domestic system caused by asylum-seekers failing to seek urgent protection in the first available country, economic migrants lacking legitimate fear of persecution, and the transnational criminal organizations, traffickers, and smugglers exploiting our system for profits.”

Alexandra Lamache, who focuses on issues involving West and Central Africa for Washington-based Refugees International, questioned whether the goal of the measures the administration is putting in place is at odds with the purpose of asylum, which is to provide a controlled legal process to give humanitarian refuge to those fleeing persecution.

“If our immigration system is not built to protect people who need it most, but purely to welcome people from countries who don’t need protection, what’s the point?” she said in an interview.

The vast majority of Cameroonians who apply for asylum are granted it—81 percent, according to a Syracuse University study, compared with 29 percent of those for all nationalities. Other Africans also had high success rates: 77 percent for Ethiopians, 67 percent for Eritreans, and Nigerians, 58 percent.

Still, the administration policy has contributed to thousands of Africans being stranded en route to the U.S. border. More than 1,000 were stuck in Mexico as of September, the Los Angeles Times reported.

During the first seven months this year, Mexican authorities apprehended more than 4,700 migrants from Africa—four times the number taken into custody in the same period a year earlier.

The Trump administration also prevailed on Ecuador to change its policy of “universal citizenship,” which had required visas from only 12 countries, half of which were in Africa. In August, the government added 11 countries to that list. Cameroon was one of them, along with six more African nations.

Pauline Binam’s concerns surfaced in the wake of a whistleblower complaint by a former licensed practical nurse at the Irwin County Detention Center (ICDC) in rural Georgia, where Binam was when the surgery to remove the fallopian tube took place in August 2019.

After the complaint by the nurse, Dawn Wooten, 35 other detainees at the center told similar stories about their care, including three who said they were the subjects of hysterectomies or other invasive gynecological procedures, an Atlanta lawyer told Yahoo News.

The ICE office said its records indicate that only two women from the facility, which can accommodate 1,200, have been referred for hysterectomies since 2018, but that it was taking seriously Wooten’s complaints about medical treatment, including adherence to coronavirus protocols.

Immigrant advocacy groups assembled a team of medical experts that examined the records of more than a dozen women who complained of medical maltreatment at the ICDC. The experts found an “alarming” pattern of inappropriate gynecological surgeries usually performed without consent, the Los Angeles Times reported a month after Wooten’s complaint.

Most of the women whose records were examined were Black or Latino, from the Caribbean and Latin America, the Times said, and were vulnerable  “to pressure to agree to overly aggressive, inappropriate, and unconsented medical care,” according to the experts’ report.

Steven Moore, a professor of government at Wesleyan University, questioned whether there could be historical and international implications to such allegations.

“When systematically targeted toward a particular group,” he said, “…forcible sterilization meets the International Criminal Court’s definition of genocide. The United States has a long history of using this practice to prevent women in stigmatized groups from having children.”

“We have no evidence that racism motivated ICE’s sterilization of immigrant women in detention. But those in government custody often appear to be the ones who are targeted,” Moore wrote in an opinion article in the Washington Post.

“Given racial biases throughout the criminal justice system, people of color will likely be disproportionately affected—as  has happened in Georgia.” 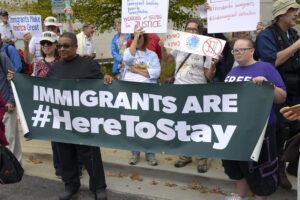